The sun’s fury didn’t really matter from the front row of the bus. I plugged in ear buds and listened to Los Miserables. (No, that’s not a spelling error; I really am attempting to listen to Hugo in Spanish.)

But I kept drifting into that almost dream state where thoughts don’t make sense and I happily embrace the sleep I know is coming. But then a truck and trailer tried to pull into our lane. The bus driver honked, swerved, and muttered something under his breath. That was the end of my nap.

But it didn’t matter, because tired or no, I was on my way to Sevilla.

As the Andalusian landscape whizzed by, I enjoyed the rolling olives groves, the plains of ripened wheat, the fields of yellow sunflowers, and the occasional glimpse of stubborn snow on mountain peaks.

My first impression of Sevilla? The realization that there are two bus stations and I was at one and my friend at the other.

Finally reunited, we dropped the luggage in the car and strolled through the Plaza de España, despite the scorching afternoon sun. 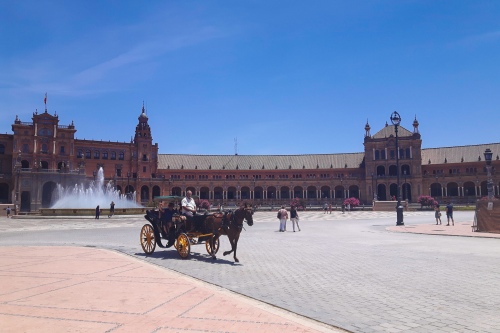 We met our airbnb hosts and then set out to shop and fill our empty bellies with Udon’s veggie yaki udon.

The next morning, we visited Las Setas de la Encarnación (The Mushrooms of the Incarnation… whose name sounds infinitely nobler in Spanish), a giant structure that provides a lookout of the city. Honestly, the modern bulk seemed a little out of place in the old city; yet, there was something intriguing about climbing a mushroom. And the view was fantastic. 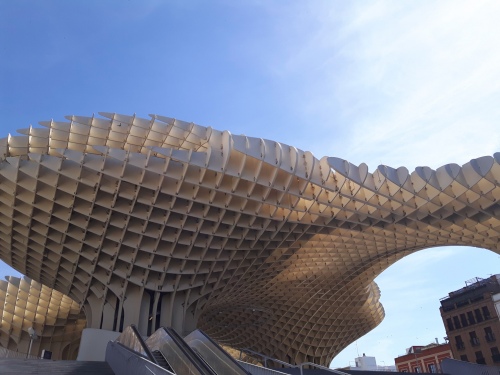 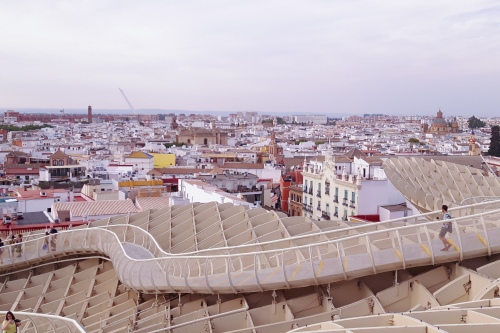 Strolling toward the cathedral, we happily made pit stops to enjoy the lovely city streets and even watch a bit of street flamenco. 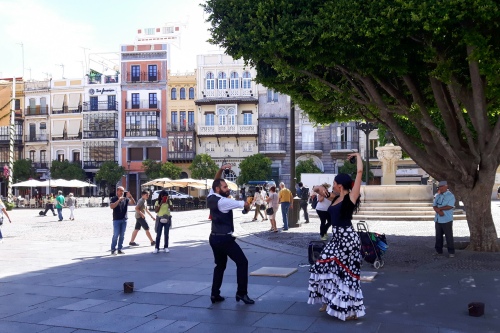 At the Cathedral of Sevilla, not only did we behold the grandeur of the outside walls, but were able to walk around inside and observe the ongoing mass. 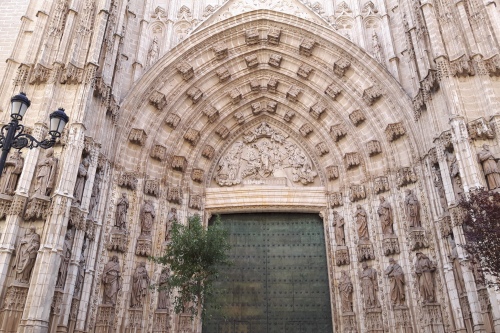 We stopped for coffee in the Jewish quarter before taking a picnic lunch to the beautiful María Luisa Park. Regretfully (in retrospect), we barely made it beyond the first row of luscious trees. We were tired and hungry.

We strolled home along the Guadalquivir.

We topped off the evening by attempting a picnic in the Jardín Americano, a park from the 1992 Expo. Not a good idea. If ever a park could give vibes… We backtracked when the only people slinking around looked like they were not the picnicking sort.

Instead, we sat on concrete boulders along the river’s lip and dipped our toes in the water. We talked until long after the sun had gone down. 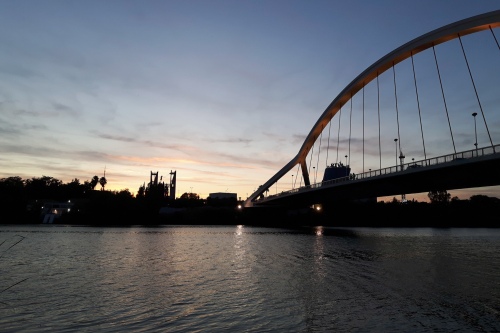 The next day was a picnic in the Alamillo Park (see a “picnic in the park” theme?) and time to soak in more of Sevilla’s scenery.

We also met up with friends to experience real flamenco. Photos weren’t allowed, but they wouldn’t have captured the experience anyway. Not the guitarist nor the vocalist. Photos wouldn’t capture the way the dancer’s eyes glittered concentration beneath the changing lights. Or how his face gleamed with the sweat of maintaining perfect control of his feet in time to the music, even while at times keeping his upper body motionless. The whirring fans did little to cool the room packed with eager spectators. Our tippy wooden bench always seemed to fit one more and why not?

On our final morning, we awoke to banging and drilling in the apartment below. We packed up and did a bit more strolling of the streets. Our last adventure was the unexpected and charming Parcería Cafe. 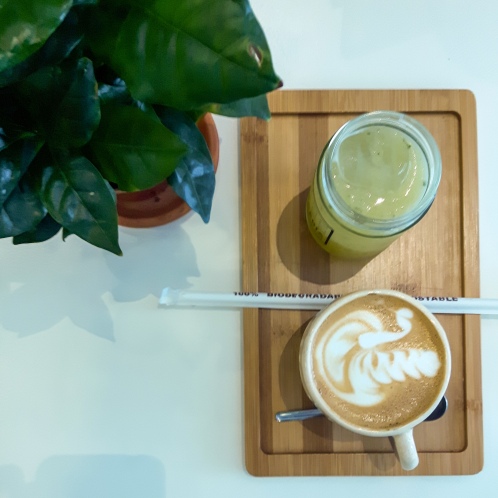 I thought I was ready to head back to Immigrantville, but as the bus pulled out of the station, I admit that there were tears stinging the backs of my eyes.